“...the over-reliance on fines and fees for government revenue creates powerful incentives to impose excessive financial penalties, with disastrous consequences on people who cannot pay...perpetuating cycles of debt, instability, and criminal legal system involvement that hurts families and the public at large.” 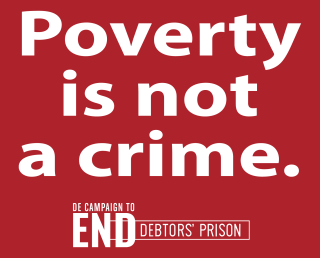 3 Ways You Can Help

What are fines and fees and how do they differ?

A fine is a monetary sanction imposed on an individual for committing a crime. This can include parking and speeding tickets as well as other tickets for minor offenses. Fines are punitive and related to the crime committed.

A fee, which is unrelated to the crime committed, simply becomes an additional form of punishment. Its purpose is merely to raise money for government.

What is so bad about fines and fees?

In our current system, the addition of fees to a criminal fine can double an individual’s financial liability, with the addition in the form of fees unrelated to the misdemeanor or the defendant’s ability to pay. This is significant, given that 85% of criminal defendants in Delaware are indigent and unable to pay. The result can be a vicious spiral of compounded poverty, subsequent arrests, and jail time.

It is about more than the initial fine.

Financial liability for a single misdemeanor with a $100 fine can double with the addition of fees also owed to the courts. These fees are not intended as a punishment or deterrent—their purpose is to generate revenue to pay for certain government functions. Effectively, courts and judges are required to serve as a taxing agency on the largely indigent defendant population, generating an insecure revenue stream for those government functions.

Prior to the passage of HB 244 (see Successes to Date), this financial liability was as much as $502, five times the amount of the fine. That 2022 legislation eliminated the $100 Public Defender Fee and the $200 Probation Supervision Fee. Those services will now be funded, as they should be, through taxes. HB 244 is meaningful reform, but it takes Delaware only part of the way toward eliminating the discriminatory impact of fines and fees and the uncertainty of revenue for government services currently funded by fees. 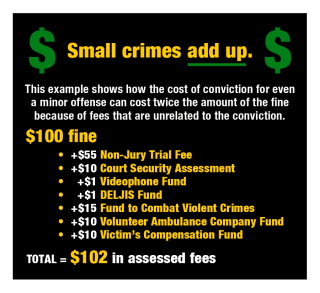 Myths About Fines and Fees

Myth: We need fines and fees to deter people from committing crimes.

A 2018 study of over 1,000 criminal defendants in Alabama found that 38.3% committed additional crimes to earn the money to pay off their fines and fees.

Myth: We need fines and fees to raise money for vital government services.

Fact: Fines and fees are an extremely inefficient way to raise revenue because they target people who can't pay.

The Fines and Fees Justice Center calls fines and fees an “unreliable and harmful form of taxation” that is “largely imposed in a way that those with the lowest economic means shoulder the highest costs. People of color and lower-income earners make up the largest portions of those in the justice system, far exceeding their percentage of the general population.” Moreover, “[c]reating budgets and programs that are dependent on arrests and convictions is literally banking on crime. If crime goes down, so does the revenue needed to fund the government.” Read the following December13, 2022, article from the Fines and Fees Justice Center.

Myth: Fines and fees are used as restitution for crime victims.

Fact: Victim’s restitution is an entirely separate cost, unrelated to fines and fees.

Defendants can be forced to pay hundreds of dollars in fines and fees that go purely toward the state’s general revenue fund, as well as funding court costs, court security, first-responder services, etc. This revenue can be more efficiently and effectively funded through means other than court-imposed fines and fees. Restitution would be unaffected by the reforms that we have proposed.

The problem of debtors’ prison that exists in Delaware also exists across the country. Read the following December13, 2022, article from the Fines and Fees Justice Center.

Let's Do Something About It

Find out how you can take action with our campaign!

3 Ways You Can Help

Made with Love by Trolley Web
Closing in 6 Seconds